This is part two of my blog following the treatment of my close friend Cherry who was diagnosed with Breast Cancer in July 2014.   If you haven't read part one - the beginning, here is the linkhttp://www.bee-photography.co.uk/blog/2014/9/cherrys-journey---the-beginning.

Part One was very much about making Cherry feel and look good as we indulged in a mini fashion shoot not long after she had had her first dose of chemotherapy.   We did a few costume changes and showcased a new wig that she'd just had made.   She looked amazing both with and without the wig as she sported her trendy close crop too.     I ended my last blog with the news that her cancer lump had reduced in size by a massive 50% by volume which was such good news.

Shortly after this news our group of friends were meeting for a picnic in Epping Forest to celebrate some birthdays all occurring around the middle of September and now we had something else to celebrate too.    We bought our families along, the weather was superb and we all had a great time dancing to music, eating, drinking and  playing a few games of rounders.  Before we all headed for home I made it my mission to get everybody together in a group photo, so  after instructing them to grab their Mulberry bags (yes, there are a few handbag addicts amoungst us!)  I dragged them, not quite kicking and screaming, but there were a few groans, the short distance to a fallen tree where I had already envisaged the shot.    I took the shot and because we all looked so fabulous we did another one for Pink Pout Selfie, Kiss Goodbye to to Cancer, a Facebook page set up by a fellow breast cancer sufferer, Jill Padayachee known to our friend Koli.  https://www.facebook.com/pinkpoutselfie?fref=ts , do take a look at the page as the aim is to raise awareness and funds.   Also if you haven't already got your Body Confidence Calendar mentioned in my first blog here's the link for that too also raising money for Breast Cancer. http://2015calendar.co.uk/.    Now back to our group shot,  here's the photo of our motley crew doing the pout, along with one of Cherry doing her own individual pout! 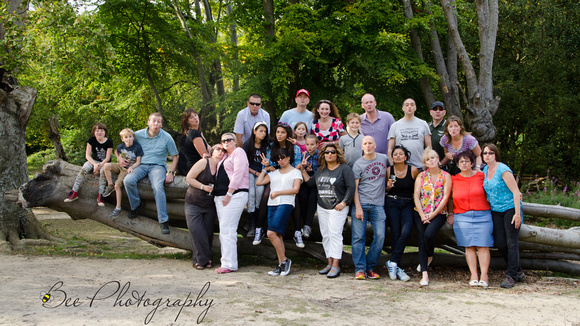 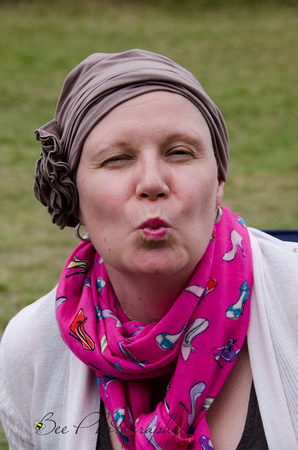 Fast forward a couple of months and Cherry and I are chatting after her fourth or fifth dose of chemo and she mentions that she'd like to have an album depicting her journey through treatment so as to have something to look back on.   I suggested to her that we really need some fly on the wall documentary style photography of her receiving her treatment to contrast with the fashion photoshoots so as to get some gritty reality in there too and she even joked that otherwise some people might not believe she's ill given that she looks so well!

I should mention that whilst she has been responding really well to treatment,  because of the change of chemo drugs she was receiving from her fourth dose onwards she had needed to take her anti-sickness tablets which hadn't been necessary up until this point.  But all in all, she seems to be taking it in her stride.   She's being sensible and knows when to rest (with the aid of a box set or two) and when to play.   I did feel for her on one night out when she was wearing her newest wig (more on that later),  it was quite warm and the wig was getting a big itchy and she really wanted to take it off but, being the trooper she is, she persevered.    Our group of friends are still maintaining the rota of overnight care and on hearing that she has been advised to eat plenty of ginger, she has been inundated with supplies of the stuff in all its different guises, so much so I don't think she will need to buy any more for another decade!

Anyway, I digress,  back to the documentary photography idea,  she agreed, and last week I was that fly on the wall at the hospital for her sixth dose of chemo.   I met her lovely nurse Hilary and her friend Annette who has been both taxi driver and moral support to Cherry on a number of her chemo sessions.        I also witnessed her new wig no 2, (affectionately called Jill by Cherry!) being trimmed by the lovely Norman as she hadn't had it long and wanted the fringe trimmed,  Norman had originally left it a bit longer as once it's cut it doesn't grow back!     There were quite a few of us in that small room!   Anyway without further ado, here are the photos.

The first photo shows Cherry 'au naturale' without her wig but I think she rocks the Sinead O'Connor look pretty well. 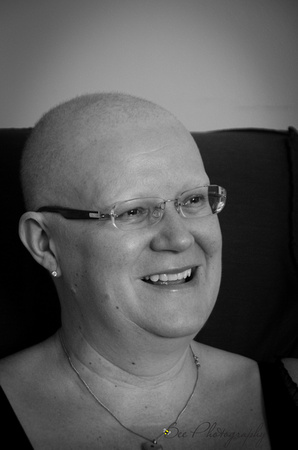 And in this next photo we see the lovely Hilary who has been Cherry's nurse through most of her chemo sessions.  Note the amount of sweets Cherry has to keep her going!   When I arrived Cherry said that Hilary had had trouble finding her veins at first so she was a bit late starting her chemo.    At one point we were chatting and Cherry forgot her words and Hilary explained that this was one of the side effects of chemo,  not sure what my excuse is then! 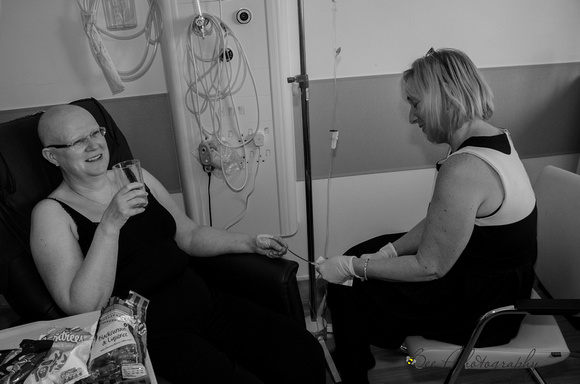 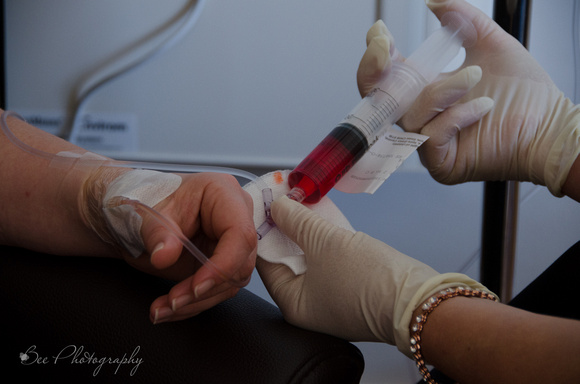 And in the next one we see Annette feeding Cherry her omlette as it's a little difficult to use a knife and fork when you are hooked up intravenously.  Sorry Cherry,  I know this one is a little ungainly but it's the reality I was talking about! 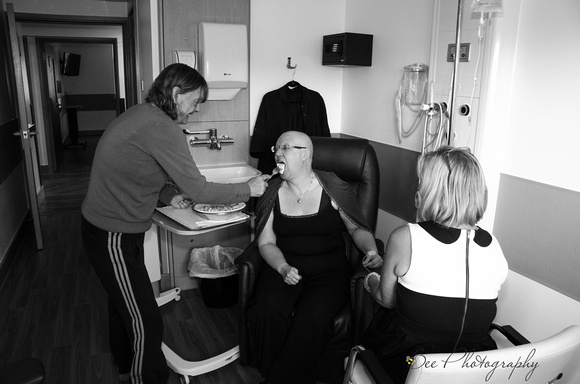 And lastly,  here is Cherry with her own personal wig stylist, Norman trimming the fringe of 'Jill'. 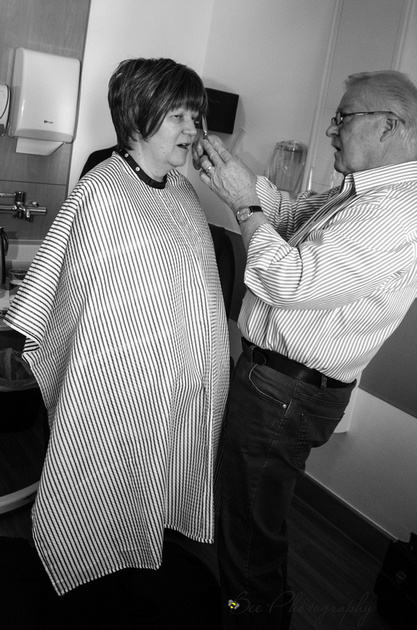 If you would like to follow Cherry's journey in her own words she is writing her own blog and here is the link http://shoecat.wordpress.com.  As per the last blog there is yet more good news, the day before these photos were taken Cherry had seen her doctor and on examination he feels that the lump has shrunk again and hopefully this will be confirmed when she has her next scan on 13th November.  So fingers crossed he's right.

Finally I'll leave you with a seasonal photograph that I took on my way back from the hospital, just because I love Autumn and I guess Cherry is in the Autumn of her chemo sessions (tenuous link I know!), only another two to go and then at least the first stage of her treatment is complete. 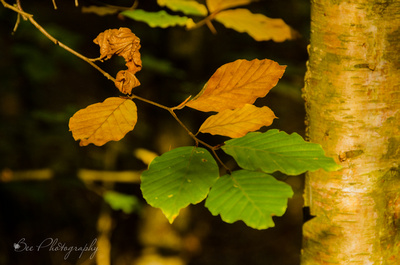